by Will Pollock, ARTvision Director

As fate would have it, our ARTvision-8 deadline for submissions was scheduled for today—one day after the Navy Yard shooting in Washington, D.C. In actuality, I was going to extend the deadline a bit longer anyway. But with this latest example of a senseless violence, the choice was clear: transmute this tragedy in to another rally cry for artists of all persuasions to make a non-violent statement repudiating these actions.

I came upon this year’s theme, “The Promise of Peace: Art Innovating Life,” in the aftermath of the Newtown, Conn., shootings that left 20 children and six adults dead and their families still seeking justice. (I come from that region of the country and have friends who live nearby today, so it all hits close to home.) Although casting a wide philosophical net, this year’s theme has no political affiliation or leaning. We take no position on the 2nd Amendment, for example; we are simply saying, as a collective body of artists, that enough is enough. A compelling way to understand and change the violence paradigm is to change ourselves, and those around us, by advocating peace. And that’s exactly what we’re up to, like these ARTvision Squared artists: “Love Yourself” by Lindsey Colohan 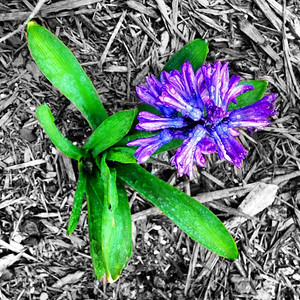 This year we’re making good on the promise in two ways: first, our show held in December at Stone Four Studios will again be juried by a three-person panel, and will feature a wide range of works across multiple platforms — all of which will, in some way, reflect a message of peace. You’ll see works as affordable as $50 and some as high as $2,000 or more, reflecting a wide price range. We’ve also launched “ARTvision Squared: Images with Impact,” a competition based on this year’s theme that features Instagram pictures that users mark with the hashtag #AVSquared - and it’s open to all. We received nearly 50 entries for 10 slots in the competition, and they’re all fantastic. (more)

Everyone working on ARTvision is an unpaid volunteer. Any and all funds we earn go to Atlanta’s own Positive Impact, which itself seeks to instill peace within the lives of those affected by HIV—by providing critical mental-health counseling and substance-abuse recovery programs. (more)

Important to remember, especially in the face of tragedy, that there are incredible, heroic things happening in the world. Ravaged by the Colorado floods, Mike Horn’s house was knocked off its foundation, and both he and his wife were swept away by the powerful current. Thinking his wife had died, he grabbed on to a tree, stark naked, hoping to be rescued. He was rescued, and as it turned out that same rescuer saved his wife, too:

Visit NBCNews.com for breaking news, world news, and news about the economy

You might be wondering: Am I writing this post to remind our artists to get their pieces in for the show? Yes indeed. Am I also seizing the opportunity to illustrate how needed and relevant this year’s theme is? It’s a “yes” to that as well. Get in the game, make your statement and contribute with the small acts of courage that this year’s theme represents.

We’ve got about one week to go until deadline. Are you in? Tell us on Facebook: What is your artistic vision for peace? Get your submissions in and contribute to a collective message that says, “Peace is the way.”