ARTvision Atlanta is an online and in-person celebration of the arts, representing offerings from emerging and established artists that create new funding and resources for our beneficiary, Positive Impact. PI provides critical, culturally competent, mental-health and prevention services in metro Atlanta for those living with HIV - and benefit greatly from your participation. (read more) 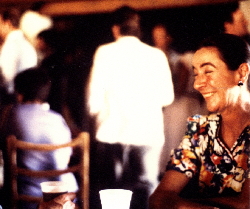 ARTvision inspiration
Launched in 2006, ARTvision was conceived by Will Pollock to honor his aunt, Betsy Weedon, who was a philanthropic leader in San Francisco's Bay Area for more than 40 years. Betsy lost a fight with cancer in April 2006. According to Betsy’s sister and ARTvision Artist, Mary Pollock, Betsy had encyclopedic literature and gardening knowledge, in addition to a knack for art collecting.

“She loved the simple things,” Mary says. “She loved her friends devotedly, and if they were interested in something special, she was always there sending them information and bestowing relevant material upon them. She loved poetry and wrote beautiful poems herself. When she died, friends from her school contacted me to ask if I knew where some of her poems were, so that they could be printed in the alumni journal. Somewhere she found a great photograph of Spender, Isherwood and Auden, all smiles together, as young men; it is a very arresting, appealing picture, and she kept it on top of one of her bookcases.”

From Betsy’s San Francisco Chronicle obituary: “Betsy was a remarkably intelligent individual who had a broad scope of knowledge, always able to expound on subjects ranging from English and Irish literature classics to mystery stories, esoteric texts, art, gardening and children's books. She possessed that rare quality of being able to listen intently to the people around her, thus helping them create a greater sense of themselves.” (read more)

ARTvision exists so that both the artists involved and those who Positive Impact serves, Atlanta’s population affected by HIV, can gain a greater sense of life purpose and mission. Hence the tagline, “artists reaching through.”

Six years of ARTvision
In its inaugural year, ARTvision raised nearly $1,500 for the International Gay & Lesbian Human Rights Commission, a group working hard to defend the rights of marginalized gay men and women in developing countries and within oppressive cultures. We'd like to acknowledge Paula Ettelbrick, the group's former Executive Director, for her hard work and for championing ARTvision's inaugural year. Paula sadly lost a battle with cancer in 2011. As one of our earliest supporters, we’d like to dedicate this year’s theme - “Uncharted: Travel to Enchanted Lands” - to her.

In ARTvision’s second year, we raised nearly $3,000 for AIDS Survival Project. In addition to expanding our available purchases to music, Citabria Phillips, Betsy's niece, offered two of her paintings for sale - one of which ("Skirt," pictured here) sold to Barb Shadomy, owner of Stonehurst Place. Citabria's piece now hangs in "The Shag"'s Hinman Suite.

We have increased our fund-raising in each successive year, culminating in nearly $12,000 in 2010 alone. Now in its seventh year, ARTvision is in its fifth consecutive year of raising funds for Atlanta’s own Positive Impact. In six years, we have earned more than $34,000 in total donations. (read more) Please help us increase that number again in 2012.

For every $100 raised, Positive Impact is able to provide
3 hours of mental-health counseling to those affected by HIV.

For the second year, ARTvision will be held as a standalone event prior to New Year’s Eve - giving donors/buyers extra time to achieve that last-minute deduction. details here. Follow this Web site and our account on Twitter for new artists signings and sneak peaks at this year’s art!

How does ARTvision Atlanta stand apart?
ARTvision is unique because all artists present their pieces for your consideration as unfettered donations - in other words, without claim of deduction or compensation - so that buyers' direct, tax-deductible donations to Positive Impact can constitute purchases. (See our FAQs)

In years prior, ARTvision had culminated each year at Will’s annual New Year’s Eve ARTvision & Gourmet Pizza Extravaganza, which is now in its 10th consecutive year. The enthusiasm of party attendees helped create ARTvision as it is today - complete with a vibrant, talented group of dedicated artists who regularly give of their time and artistry to benefit PI.

This event was borne of the generosity and excitement from everyday people who want to make a difference, and our treasured artists reflect that.

Ongoing thanks to...
Craig Eister, an ARTvision 2006 buyer of "Miles Away," who has helped champion the event from its inception and worked so expertly with AIDS Survival Project during its evolution.

All of our sponsors - past, present and future - for helping give buyers that added incentive.

To the local-Atlanta media for helping us get the world out and make ARTvision an established charity vehicle in the city, including the GA Voice, Project Q Atlanta, Fenuxe and many others.

To Michael Baker, Paul Plate, Michele Segre, Penny Frulla, Jason Maynard, Sean Mansfield, Jim Detmer, Rob O’Connor, Rachel “Rocky” Modena, team Positive Impact and all of our other support folks - you make this event the best it can be, and all it will become in the future.

Most of all, to our artists and buyers who breathe life into this event and bring great attention to and for Positive Impact - we love you!

Artist queries or purchase questions to Will Pollock; please send all media inquiries to Michael Baker of Positive Impact.

Once again, THANK YOU to everyone for making ARTvision so successful.